This weekend the girlfriend and I went over to Browerij Lane, my favorite beer bar in the neighborhood, to beat the heat and try some interesting new stuff.  When we arrived, we noticed that six of the beers on the chalkboard were highlighted in red. Little did we know that it was the weekend of the Sour Summer Sampler! They were pouring flights of 6 hard-to-find sours for 20 bucks. Done and done.

Here are some tasting notes we compiled, in order from lightest to darkest. The girlfriend’s completely scientific rating is listed under C and mine’s under B.

Cisco Lady of the Woods

“Nantuckett’s Cisco brewers aren’t necessarily known for their sour ales, but they create some of America’s best. This 5% wild ale has chardonnay-like vinous notes, tropical fruit, coconut, oak and funk.”

“This relatively modern lambic was added to the Cantillon lineup in 1998 and named after Francois Daronnat, a french apricot grower nicknamed ‘foufoune’.”

“The original beer (before its sour treatment) recreated and ancient egyptian beer recipe. Ginger, myrrh, and orange peel are incorporated, as well as unmated kamu wheat. This version’s bacterial fermentation lends a gentle tartness which compliments this beer’s delicate honey and orange flavors.”

“L’abbaye de Saint Bon-Chien is a unique ale aged in wooden casks which have been used several years before to age merlot, cabernet, whiskey, and then grappa. The simple pre-barrel amber ale base is described by BFM’s Jerome Rebetez as ‘a prostitute’, a simple, balanced strong ale that readily takes on the character of each of the barrels he’s chosen to introduce.”

“This is a strange one … a belnd of ‘Hollandish’ oud bruin around 3.5% alc/vol, dortmunder lager bockbier around 6.5% alc/vol, and the primeval beer. The ‘primal’ beer has been aged in traditional wooden barrels. It introduced lactobacilli, brettanomyces, and other microflora.”

“Alvinne is one of Belgium’s newest and most highly regarded breweries. This beer is often referred to as ‘straight freddy’, a wild ale with notes of molasses, dark fruit, coffee, red wine and blackberries.”

All together, a fantastic group of unusual beers!

Brooklyn could use more breweries like Sixpoint. They’re local, they’re experimental, and they’re good. I like them for what they represent around here, but to be honest I don’t always like their beers. Sweet Action is pretty good, but too malty and indelicate for my tastebuds. Bengali Tiger is way too muddy and overwhelming both in malt and hop character. Its the beer equivalent of turning your clock radio up so loud that you can no longer make out the music. On the other hand, there are the one-offs and the limited releases. For whatever reason, I’ve enjoyed these immensely more than the standard fare. Maybe its a matter of freshness? 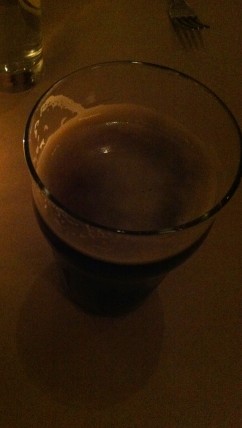 It was pretty dark in the restaurant, but you wouldn’t be able to see through this beer anyway.

I got my first taste of one of these local draught-only brews on a recent trip into DUMBO to check out Jack the Horse Tavern, an establishment whose name I’ve grown uncomfortable saying aloud. Regardless, they had awesome burgers and a pretty nice beer selection including Brownstone, Sixpoint’s take on a classic American Brown Ale.

Color: As you might expect, a deep rich brown. Nearly opaque with a thin tan head.

Taste: Nutty and chocolatey, finishing with a bit of dank pine. A really light body and delicate malt character throughout. Malt bitterness was low, but detectable. Nothing overwhelming, a really solid example of this style.

For those of you accustomed to some of the more over-the-top offerings from this brewery, I’d suggest checking this one out for a nice change of pace.

We played trivial pursuit while we drank. It is best to test one’s knowledge throughout all stages of inebriation.

The more I brew and drink beer, the harder it is to impress me. I’m not talking about beer snobbery (although I’ve been known to suffer from it occasionally), I’m talking about technical skill. Every home brewer knows that some styles are more “forgiving” than others in terms of off-flavors. Don’t get me wrong, I love a palate-wrecking quadruple IPA as much as the next guy, but what’s much more rare and exciting for me is finding a super clean, fresh, well-handled Kolsch or Bohemian Pilsner. Those styles don’t hide flaws, and you have to be pretty damn good to pull them off well.

I encountered one really good example of this kind of skill at a recent trip to Breukelen Bier Merchants in Williamsburg: a German Helles called Stoudt’s Gold Lager.

Color: Like the name suggests, this beer is  supremely clear, bright gold in color.

Aroma: The aroma is minimal,  a bit spicy from the hops.

Taste: A really nice rush of noble hop bitterness up front, but nothing too overwhelming. The finish is very smooth, with subtle graininess. This beer has none of the overwhelming hop character that many domestic craft lagers have, and it works because it’s such a squeaky clean beer. As a lowly home brewer, it makes me jealous.

When you look up “drinkability” in the dictionary, there should just be a picture of this beer. You should also throw the dictionary away, because no self-respecting dictionary should contain that word.

Growing up in NYC, your first craft beer experience tends to be through Brooklyn Brewery.

My mash tun, the crushed grain, and a freshly washed carboy.

Whatever opinion you might have of them these days, the fact remains that for many years they were one of the only voices for good and (arguably) local beer in the city. I’m not a huge fan of  their flagship Brooklyn Lager – it tastes a little under-fermented to me most of the time. And I’m also not a fan of anything they put out in cans or 12oz bottles – that stuff is contract brewed outside of the borough somewhere and tastes totally different and totally inferior to the real stuff. That said, I’m still proud to say that Pennant Ale ’55, their english-style bitter, is one of my favorite all-time beers. It’s nothing over-the-top, nothing dank or ultra hoppy or roasty or caramelly(?), it’s just a supremely well-balanced easy-drinking ale. It’s copper in color, with the slight citrusy bite of American aroma hops followed by the grainy biscuit character of english malts. It’s a complex beer masquerading as a simple one. It’s really good. Try it.

The crush — Maris Otter, a little Crystal and some Biscuit Malt.

My girlfriend’s brother (also a homebrewer) is getting married in August, and as we’ve had many in-depth discussions (read: drunken ramblings) about the finer points of our shared hobby, he invited me to brew up a few batches to be served at the reception. As I was considering which styles would suit a New England summer wedding, my beloved Pennant Ale came to mind. Total crowd-pleaser. 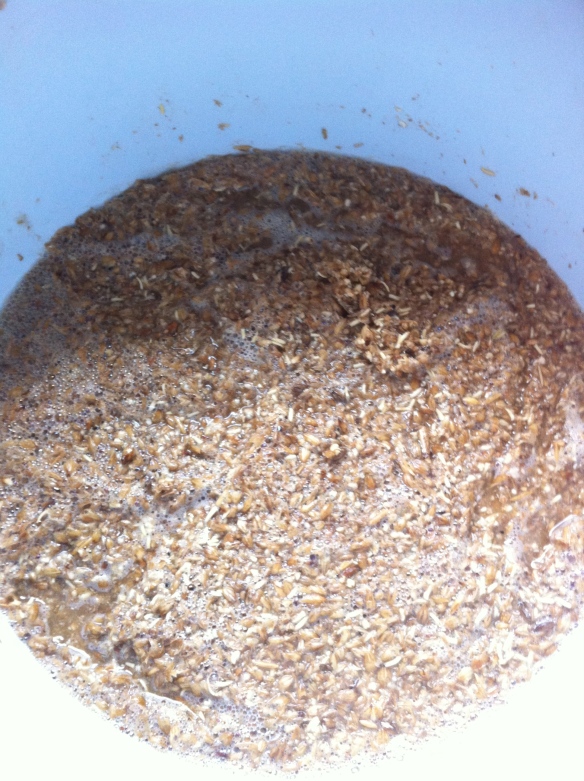 Mmm … you can almost smell it.

This was about as clear as I’ve ever gotten the first runnings.

In formulating the recipe, I started with this clone published in BYO magazine. I decided to dial-back the gravity a slight bit (more on that later) and tinker around with the bitterness. I wanted something a little more on the session-side than the original in order to not scare anybody away on a hot Vermont afternoon.

Lots of Kent Goldings, as well as some Summit at the end of the boil.

My LHBS also didn’t carry any fresh English Ale Yeast (WLP002), so I opted for the higher-attenuating WLP005 British Ale. I ended up with the recipe posted here. On the brew day, I underestimated my efficiency and ended up with an original gravity of about 1.056, which is identical to the OG of the clone brew! With an estimated FG of 1.015, this puts me at about 5.5% ABV. Oops, I guess granny’s gonna get drunk after all.